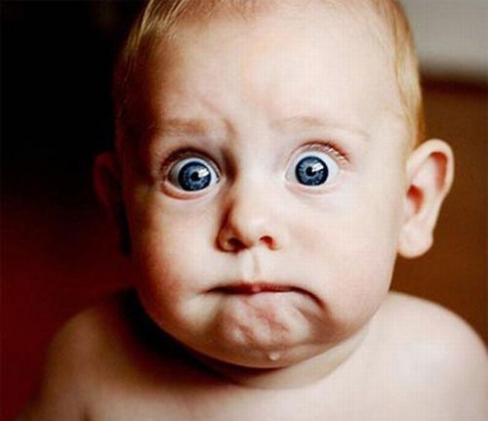 When you reach a certain point of size in your trading, the swings becomes naturally bigger. One of the main lessons I’ve had back in 2015 was that how you handled liquidity was definitely important. My specialty has always been about trading small cap/third liner stocks, that’s where I’m able to make a killing. That worked for my personal account, back then, but when I started managing funds the mechanics of the game began to change.

Instead of just your own money, you also have the responsibility of other people’s funds. This adds up to your total position size, which makes it way more challenging to traverse in the markets (specially on illiquid stocks).

So how did I experience my first 7-digit down swing?

This was during 2015, I was positioned heavily on a single stock for my client’s fund, it was also my first time to handle such significant amount. It was kind of my conviction call back then. My position was nearly around X0,000,000 in one stock (around 8 digits)

The market was suddenly crashing, when the index went down, most of the small cap stocks dried up, they were falling fast. At first, there were enough bids to cover my position, there were 500k to 1m shares at the bids…

However, because of my size, I was hesitant to trim/cut my position because I was thinking “shit ako mag-papabagsak nitong stock na to, whole size ko na yung buong support. Kapag binagsakan ko mamamatay tong stock na to”.

I decided to hold even if initial support levels were broken and even if my stops were hit.

Earlier I tried to trim around 1/4 of my position, but the bulk of it was still there. I was too late. Because of my reluctance to cut and trim, what should’ve been an easy 3 to 5% loss floated to around 10%-20%. My position reflected around Php 1,000,000+ loss during that time. 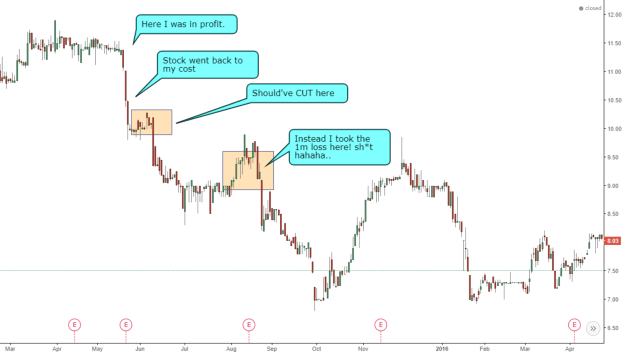 What did I do?

During that time, I felt that the index was really toppish. It couldn’t recover back above 7800+. To protect myself from further downside, I just decided to cut my whole position and live to fight another day. 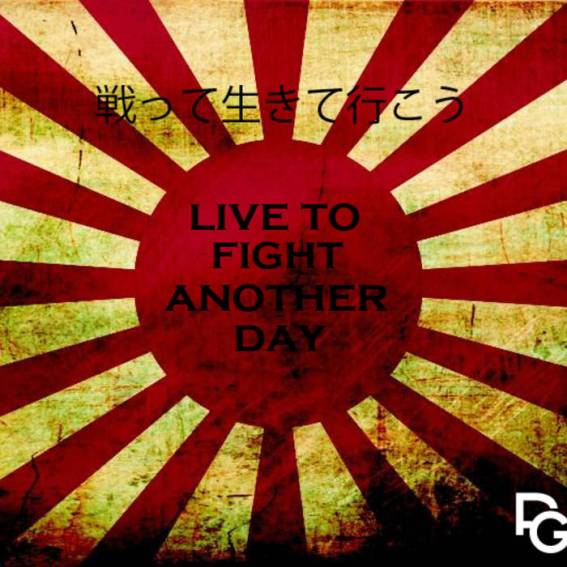 I sold every single share, I forgot the exact amount, but when I saw the stock recovering a bit, and there were big bids forming I sold it all off and I took the Php 1,000,000+ hit. Sarap noh?

What I did next.

But in my mind, because I was already handling a bigger portfolio, it was expected that the swings would also be bigger.

This experience reminded me during my first year of trading. When I reached my first million, I became overconfident, I went all in, then the market started crashing, I took a 100k+ loss (approx 10% of what I was trading back then)

This Php 1,000,000 loss is the same experience. Except everything is much BIGGER, and the feeling was exponentially more challenging as well. But on a percentage standpoint it wasn’t too bad, that was just roughly around 10-15%+ of my position.

After taking the biggest hit of my life. Of course I was stunned, but I always had the attitude of finding the solution to improve myself, regardless of the challenge.

I went into retrospective mode. I’ll share to you the thought process.

Here you basically highlight what you did right, what you did wrong, and how you can do better for the next time. You must be as objective as possible. Eat your ego and pride and all your feelings.You must identify the root causes of your error so that you can minimize them and improve in for the future. If you want to be really good at your craft you must be your first critic. Acknowledging our weakness is the first path to STRENGTH.

So here we go:

– Don’t be rooted too much in your opinions. My specialty is being a technical trader, this time I tried to convince myself with the fundamentals of the stock. I became attached to my conviction and opinion.

– Not following my risk controls. My system has its warning signs in place, but because of my judgment to hold off instead of to just follow my rules, this costed me a lot.

– Lack of experience. The latter part of 2015, was really something. Previously alpha plays were just falling apart, and became illiquid going down. This is something I couldn’t control, but could’ve prevented if I was more careful.

– Resilience. Even if Php 1,000,000 was a very big amount, specially in my case during 2015. I didn’t lose myself, I didn’t cry, I didn’t quit. I decided to take responsibility for my trade. Regardless if I was a bit late, I ate my pride and corrected my mistake.

– A mistake will only stay a mistake if you do not correct it. After cutting my loss, the stock went falling by another 25%, and it just became stagnant for around 3 years. IF I had just waited and decided to be “an investor” on it, then I would’ve still been at a loss even after 3 years+. Objectively, I was able to make the right decision, even if it was late.

– Balance (No ALL IN). Another thing that helped me correct my mistake was because I wasn’t all in. Even if the position was significant, that wasn’t the whole amount. That made everything easier, because relatively the damage wasn’t that bad considering the WHOLE size of portfolios that I was managing.

3) What I could improve:

– FOLLOW YOUR RULES. I knew what I had to do, but because of my emotions and lack of experience during that time, I wasn’t able to execute.

– REFINE YOUR STRATEGY. I was doing well and beating the markets consistently using what I was good at, but because of my bigger port due to my managed accounts, I tried to experiment by adding fundamental metrics to add to my conviction. This isn’t necessarily bad, but because I was in a mixed-up stage in a very challenging market environment, I lost touch of my execution and discipline as a trader.

– RISK MANAGEMENT. Don’t argue with the market, respect your rules and systems… If you are seeing warning signs, then lighten up your position. It’s easier to buy back than to become IPIT. 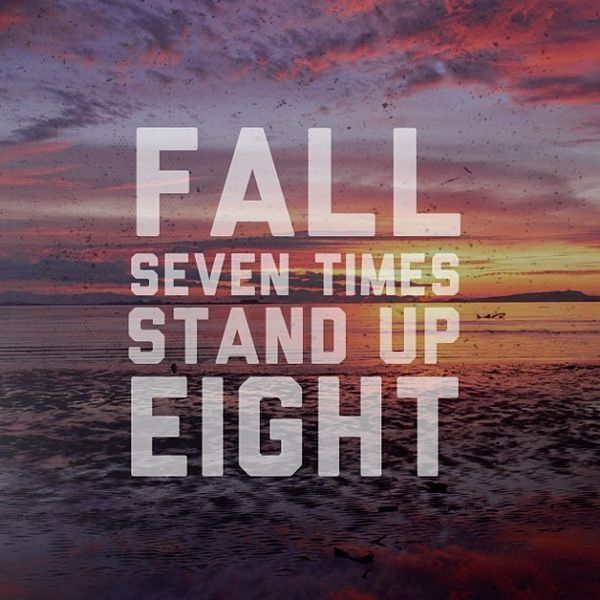 It is all part of the game, and I considered it as part of my process to transcend to higher levels as a trader. After cleaning my port, I cleansed my mind and started to work on how to get back and become better.

It’s about refining your system and process as a trader. After doing my retrospection and refinement. I was able to develop better strategies and rules so that next time I wouldn’t be taking unnecessary hits, and so that I could play the higher stakes games more effectively.

“never let any single trade dictate the fate of your whole portfolio.”

Meaning, I never go all-in, or if ever I’d do that in the future I’d make sure that I’ll be x5 tighter in my risk management.

Also, since I was aiming to manage bigger amounts in the future, I was also preparing myself mentally on how to handle bigger swings. Example, if you were managing Php 50m, a 10% swing would be instant -5m, a 5% swing would be -2.5m — if my brain and system couldn’t handle those amounts then I would never survive playing at the bigger leagues.

I knew that this was all part of the process.

During this whole period, I was just observing the market, and preparing myself to get back in the game. I was studying and improving my system during the whole step back period.

When the market bottomed 6100 then gave confirmation around 6400-6500+, I instantly fully allocated my portfolio. These were strong signals on my part, and I knew that I’d be more responsible now with managing my risks. Soon after, the portfolio was able to recover and I ended up positive by around 20-30% 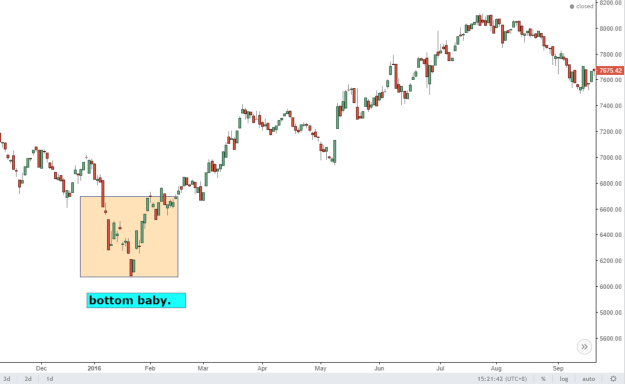 While the index was bottoming out and had a strong rally to 8000, the stock which I cut, did nothing.

Good thing I chose to correct my wrong. It paid off.

For me these moments where you lose big, are the moments where you are given the opportunity to truly become a more SOLID trader. All the market wizards that I’ve read about come from losing moments, which they conquer and turn into stepping stones.

When I first handled 8 digits in 2015, I lost Php 1,000,000, I de-constructed myself and worked 10x better and now I’ve made multiples past that loss and I can now handle myself better at these higher levels.

It’s part of the ball game. As your portfolio size becomes bigger so does the difficulty of the game. In global markets, handling 1 Billion pesos is no problem, that’s just 20m USD and you can go in and out in an instant without needing to think about the liquidity.

Example. HOW do I get a 8-digit position in a basura stock? that’s a different challenge on its own.

At the end of the day, it all boils down to how your Psychology – System – Risk Management comes into synergy, that’s how your execution is defined.

If you want to reach a high level at trading, you need to be able to constantly admit mistakes, and correct them. You must be willing to improve all aspects of your game 24/8

I have no problem sharing to you these losses of mine, because I’m really proud of them. They have been my greatest turning point and if I didn’t experience them, I wouldn’t have grown exponentially as a trader.

You see me now comfortably trading huge amounts, that’s because I emphasized on my foundation early on as a trader.

I hope that this blog will help all of those who are trying to recover from their losses. You can do it! Past is past, your fate is dictated by what you do in the present 🙂